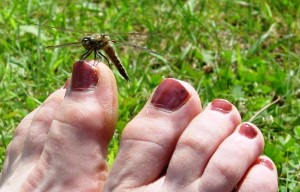 We just have friendly, nice to get to know you bugs.  I thought I’d share a few of my favorite photos.

To start you off, this little critter has been visiting our flowers.  We’re lucky enough to have hummingbirds in our yard so we thought we had a tiny baby hummingbird.  That was, until we got a good photo of it and saw the antenna.  It’s called a Hummingbird Moth, otherwise known as a “Common Clearwing”. But there is nothing common about it.  It is a beautiful mix of translucent and black wings; its body’s olive-green melds with muted reds, that from a distance look orange.  Its tail flips down like a lobster’s tail.  It moves among the flowers in the company of bumblebees and has no fear.

Several years ago, in the early fall, we would have a nightly visit from this Luna Moth. We would go out at night with a flashlight and if we walked around the house we would always find it.

Later in the fall, when the frost was threatening and the last leaves were dangling from empty limbs, this less beautiful, but much more interesting creature hung around our house for several days.  He looked like a brown leaf that, after falling from a tree, had become tangled in the screen’s mesh.  I don’t know what kind of moth this guy was and have even wondered if it might be a bat posing as an insect.

Enjoy reading, writing, hiking, hangin' with family, friends and my dogs, watching soccer (Go Breakers), baseball, football. Favorite foods are coffee, chocolate, and artichokes. Always thinking of new stuff to do and then not doing it.
View all posts by Barbara Rath →
This entry was posted in Just for Fun and tagged Bugs, Cool bugs, Dragon Fly, Hummingbird Moth, Luna Moth, New Hampshire. Bookmark the permalink.

2 Responses to Bugging Out

A blog about law and equity

The Mermaid who sings with her pen

What You Blog About

Short story fiction from around the world